Although classroom teachers are vital to language learning, an authentic educational experience does not have to begin in the classroom. On a recent trip to Tokyo I had the opportunity to sit down and speak with Eric Kelso, a voice actor with an extensive history teaching English and being a key player in English education in Japan, such as recording for the NHK and creating The English Game, an app to teach students to use authentic English. Take a few moments to see his thoughts on the current state of English education in Japan, many ideas parallel to current language pedagogy in the United States and elsewhere.

Tell me about your English teaching background.

Well, I started teaching English on my first day in Japan in 1986.

I went to UC Santa Barbara and majored in Film studies, and two weeks after I graduated I set out to travel around the world in search of interesting documentary film subjects. Japan was my first country.

I planned to stay for just two years, but I fell in love with the country and enjoyed my work teaching and voice acting, and have now been here for 32 years. I have no teaching license, just “on the job” training. I started with basic conversation classes at a kind of “fast food” English school; get ‘em in and get ‘em out. Back then in the bubble economy (editor’s note: a time period in Japan’s history with a rapidly expanding economy, eventually resulting in a recession) English was becoming extremely popular, and they needed people to teach it!

After landing at Narita Airport and making my way to Tokyo, I found a cheap youth hostile to stay in with others like me who were looking for work. The Japan Times, an English-language newspaper, had a job classified section. Before I could even put down my bag, I called a company in Shinjuku, set up an immediate interview, and within 30 minutes of the interview, was teaching my first class. So, without any previously arranged job or training, I was in my one suit, teaching an English conversation class, just two hours after arriving in Tokyo.

After a couple months, I decided to moved on to more traditional classrooms, with more focused lessons and better pay. I called the Department of Education and became a classroom teacher of English at a local high school. In many ways, this was similar to the fast food English classes; I was basically a babysitter for the Japanese English teacher, who hesitated speaking English because of his lack of ability. I’ve heard, however, that this situation has improved greatly in the past few years. I also obtained teaching positions at a women’s college, preparatory school and University of Commerce.

Eventually, a Japanese English teacher at the high school introduced me to a producer at NHK (the BBC of Japan) where I started teaching on TV and radio programs, which was a whole new experience.

How comfortable are you speaking Japanese?

I’ve never really studied Japanese. I wanted to try “emulsion learning.” Because of this, verbal communication is okay, but I can’t read or write very well. I learned by listening only. My everyday Japanese is natural and I don’t have to translate in my head, but I lack grammar, vocabulary, and “keigo”, which is the honorific form of Japanese used in formal situations.

When did you switch from teaching in the classroom to teaching on shows and apps? Were you still voice acting while teaching?

As TV, radio and voice acting jobs increased, I cut back on classroom teaching jobs. Nowadays, I mostly do voiceover work for TV, video games and corporate videos, but I still teach a couple conversation classes at the NHK Culture Center.

Over the years I’ve done about 15 TV and radio programs, teaching English as a show host, reporter or voice actor. I’m currently the voice of “Orton the Whale” on the NHK TV program “Playing in English with Orton”, which is similar to Sesame Street in the US. I mostly host and MC, and am not as involved with the teaching content. I’m in the studio every other week to record openings and closings, and segments such as pronunciation games or cooking classes with Japanese kids and their families.

I’m also the voice on about 3,000 different educational recordings, including textbooks and testing materials from elementary schools to universities, as well as university entrance exams.

Tell me about The English Game app. Did you work with any educational experts while creating it? In what capacity?

In Study mode, players can choose individual categories and in Play mode, categories come up randomly for added challenge. All missed questions are saved in the Missed file so that they can be reviewed later. 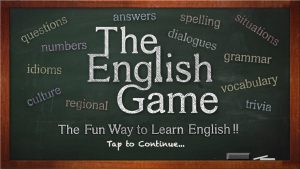 Teachers can also conduct small classes using their iPad, or large classes by wirelessly connecting their iPhone or iPad to a TV monitor, and can control gameplay by encouraging students to shout out commands and answers, which promotes confidence and voice projection.

The game is voiced by professional male and female narrators from the US, Canada and England and can be used by any English learner from any country.

What are some of the teaching challenges working on shows and apps (for example, being mindful of your accent, speaking slowly, etc.)

There are always target levels and educational points. For example, whether to teach American or British English is decided. Sometimes we even teach both! For example, in The English Game app, we make a point to tell students that it’s an elevator in American English, but you’ll be taking a lift in the UK. In addition to grammar, syntax, and vocabulary, we also thought it was important to have a cultural context. If we want students to go out and use English in their home country or abroad, giving them a cultural context will make them better English speakers.

Do you prefer classroom teaching or working on TV and radio programs?

I like both. It depends on my mood. Classroom teaching is two-way communication, so you can see the results in a more realistic and organic situation. TV and radio shows are one-way communication and planning and target teaching points are very important, so they’re usually scripted.

In general, how well do Japanese people understand and speak English?

I think there are 4 reasons for this.

Second, in Japan there’s a fear of making mistakes. In Japanese culture, mistakes are considered rather shameful, so students hesitate and are very slow to speak.

Third, Japanese culture generally discourages expression of personal opinions or debate, even in Japanese, so students have a very difficult time expressing themselves in English.

And finally, Japanese are traditionally shy. As a result, they lack the confidence to speak at all, even in Japanese.

However, on the whole, the situation has been improving. There has been a push recently to bring English education into the elementary school level, and a move away from only grammar and reading towards a more natural approach to communication. And maybe most importantly, there has been significantly less xenophobia in Japan. When I first moved here, people were very wary of English and foreigners, simply because there were so few. Now, the Japanese are more relaxed, and more open and willing to learn.

I know you have a new book. Can you tell me about it?

Sure. My new book is entitled “Ericisms: Thoughts on life that spill out of my mouth from time to time…”, which can be found on Amazon books.

Sometimes I say things about life that my friends call “Ericisms.” Nothing too deep or important, just kind of fun food for thought. So, I decided to start writing them down and eventually collected enough to fill a short book.

They’ve been translated into Japanese so readers in Japan can agree, disagree, ponder, laugh, or simply study English. And since they’re kind of philosophical points, it’s not always a direct translation, so students can understand how abstract ideas are represented in different languages.

Can you give me a couple examples of “Ericisms?”

I know for the book you used a translator. Were any of your Ericisms particularly hard to translate?

Yes, actually, some of them didn’t translate well because some concepts and vocabulary just don’t exist in other languages. I also tried staying away from anything that would be connected to American culture, history, politics, media, etc. These are references that a non-American might not understand, let alone a non-English speaker.

Hopefully, the ideas dealt with in the book are universal and anyone from any culture can gain something.

Eric’s book, Ericisms: Thoughts on Life that Spill out of My Mouth from Time to Time, is available on Amazon, and The English Game can be downloaded for iPhone and iPad at theenglishgame.co.