We have two collections in the NML Library: the Allen Walker Read Library and the collection of Anne Kietzman International Children’s Books.

In June 2009, retired librarian Ann Kietzman generously donated 230 children’s book in many foreign languages to the National Museum of Language. This welcome addition to the Museum’s library is available to visitors to the Museum and is used in displays and as part of school visits and summer camp activities. The collection includes texts in such disparate languages as Ukrainian, Spanish, Arabic, Chinese, French, Polish, Japanese, Portuguese, German, Gaelic and Korean. The books were accumulated by Ms. Kietzman from sources around the world during her career as a librarian at the Harford County Public Library. She, her friends and relatives were always looking out for appropriate additions to her collection on their far-ranging travels, and now the books have found a welcome home at the Museum. 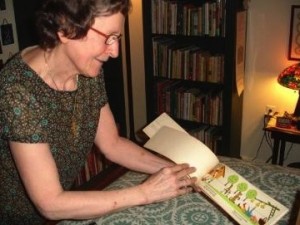 Among etymologists, Allen Walker Read was known as the man who had discovered the origin of the term “OK.”

His quest began in 1941 when, as a former research assistant for the Dictionary of American English, he thought he would help out old friends still working there by finding an earlier reference to OK to “add some freshness to their entry.”

What he found was that “OK” didn’t stem from the Choctaw word okeh or oke — a popular theory of the time. Nor did it come from “aux cayes” — the Haitian port of Aux Cayes from which premium rum was exported. Or olla kalla, Greek for “all good.” Or Orrin Kendall, who manufactured a better-than-average Army biscuit. Or any number of other sources.

Knowing that the first general use of OK began in the 1840s, Read paged through old newspapers from that decade. He was able to document — and documentation is the key among etymologists — that “OK” stood for “Old Kinderhook,” a reference to President Martin Van Buren, a native of Kinderhook, N.Y., who ran unsuccessfully for reelection in 1840.

Democrats supporting Van Buren dubbed themselves the “Democratic O.K. Club,” Read found. Later, a writer supporting Van Buren asked, “Will you not say O.K.? Go ahead!” This, Read wrote in 1941, was the origin of the word that later became ubiquitous in almost every language and throughout the world.

Much to the consternation of his fellow, begrudgingly admiring etymologists, the issue seemed settled.

Years later, when another academic found an earlier use, Read was forced to dig deeper. He found an even earlier source — a Boston newspaper in 1838 that playfully used initials for such phrases as G.T.D.H.D. (give the devil his due) and O.K.K.B.W.P. (one kind kiss before we part) In this vernacular, O.K. stood for “all correct,” spelled just for fun as “oll korrect.” Old Kinderhook and “oll korrect” have long been the first accepted sources for the word.

Thus Read remained the “OK” man, a notoriety that, by age 83, he told the New Yorker magazine in 1989, he was “almost a little tired of.” He did not appreciate having OK overshadow the hundreds of other etymologies he divined. He loved showing how words travel curlicue courses, the mapping of which sheds light on how people think and live. In tracing how the Rocky Mountains came to be called the Rockies, he learned that in 1804 they were the Northern Andes.

His achievements included contributions and commentaries in Funk & Wagnall’s, Random House and other dictionaries; being an editor of the Dictionary of American English; and writing the entry on “dictionary” for the Encyclopaedia Britannica.

Mr. Read saw words as playthings and told The New Yorker that “jubilance is an explanation for a lot of the things that happen in language.” He loved and studied slang, euphemisms, pig Latin, double talk, adult baby talk and graffiti. Exuberant, obviously impromptu words like blustrification and discombobulate delighted him.

He once compiled names that natives of Connecticut have called themselves, including Connecticotians, Connecticutensians and Connecticuties, the last reserved for pretty girls.

In 1926, while teaching at Missouri, he hitchhiked to Estherville, in western Iowa, to search out the origin of the word blizzard. It had originally meant sharp blow or volley, as in a blizzard of shot from a gun. He learned that a man called Lightnin’ Ellis had first used the word for a snowstorm in 1870, in the local paper. Within 10 years, it had spread throughout the Midwest.

In 1928, on a sightseeing trip through the western United States, he collected graffiti from public restrooms and privately printed the results in 1935 as Lexical Evidence of Epigraphy in Western North America: A Glossarial Study of the Low Element in the English Vocabulary.

In the book, he wrote: “That anyone should pass up the well– established colloquial words of the language and have recourse to the Latin ‘defecate,’ ‘urinate,’ and ‘have sexual intercourse,’ is indicative of grave mental health.”

He wrote scores of research papers and monographs, and his several books included Milestones in the History of English in America, a collection of essays published by the American Dialect Society.

Read, who was born in Winnebago, Minn., on June 1, 1906, earned a bachelor’s degree from the University of Northern Iowa (then known as Iowa State Teachers College) and a master’s from University of Iowa writing his thesis on Iowa place names, and was a Rhodes scholar at Oxford. He taught at the University of Missouri and the University of Chicago before going to Columbia where he was an English professor from 1945 to 1974 and was head of many linguistic organizations, including the International Linguistic Association.

He also was a consultant on many dictionaries, including American College, Funk & Wagnall’s Standard, Random House of the English Usage and others. But he did not believe that dictionaries should be final arbiters of correct usage.

“The great danger in the use of dictionaries is that they may come to be thought of as straitjackets that prevent the swinging, free enjoyment of the mother tongue,” he wrote in Consumer Reports, which had asked him to make a recommendation of a dictionary. According to the New Yorker, the Consumer Reports article brought Read the most scathing criticism of his academic career from readers who called him “a wrong–side-up pedant” and “standardless sociologist of language.

But Read stuck by his guns.

“Standards are a personal matter, and any attempt to impose them on others is fraught with great danger,” he wrote in Magazine Word Study in 1965. “Anyone who tries to defend ‘the treasure of our tongue’ should recognize that a valuable part of the treasure is the colloquial element, localisms and slang.”

Extending this theory, he believed that everything changed all the time. Thus he developed a “strong dislike for what he calls ‘absolutisms,’ such as ‘perfect,’ ‘correct,’ ‘certain,’ ‘pure,’ ‘total,’ ‘true,’ ‘final,’ ‘ultimate,'” New Yorker writer Michelle Stacey wrote in her 1989 piece.

Take, for example, the arbitrariness of the name “Rockies,” now an absolute. Read found that in 1804 the Rockies were called the Northern Andes and that other names given to the range were Stony, Shining and Enchanted — all perfectly good names that now seem odd.

Or take, for another example, the word “liberal.” President Reagan took this very good word and turned it into something “dreadful,” Read said.

Read called this phenomenon a “semantic blockage,” something of great interest to him but one that, alas, he never brought to the level of academic fruition that he intended. The other lifelong project that he didn’t finish was a comprehensive dictionary of “Briticisms.” Though he had boxes and boxes of files on the subject in his apartment on the Upper West Side of Manhattan, including files that explored the differences among old bean, a gent, a bloke, a chap, a cad, a toff and a lad, he was not able to finish this momentous project.

Read throughout his life grappled with what language should and could be to a people. In an essay he wrote as a foreword in Funk & Wagnalls, he recited this allegory from psychologist Hadley Candril:

Read liked to think of himself as the middle umpire.

Allen Walker Read passed away at the age of 96 in 2002. His personal library forms the core of the library at the National Museum of Language which is named in his honor.

[Text borrowed from copyrighted articles in the Chicago Tribune, the Los Angeles Times and the New York Times.]