While many of us learned a language in school to some degree, the issue of language learning has taken many new turns, particularly in the past 20 years. In K-12 schools, gone are the days of vocabulary lists and grammar charts; instead, students are expected to read, write, listen, and speak in the target language, using authentic resources and proficiency-based standards from ACTFL (American Council on the Teaching of Foreign Languages) as their guide. Colleges and universities are offering more and more opportunities for study abroad and deep dives into culture and linguistics. And language has now become a critical part of national defense and intelligence interests; particularly post-9/11, the rise in need for Arabic, Russian, Chinese and more languages have far outpaced the availability of speakers.

With English as the lingua franca of the United States, and in many places the only language known, the need for learning languages in schools, the military, or more, has become more critical than ever. And with budget concerns, lack of qualified language specialists, and a myriad of other potential issues, we may have never faced a bigger potential crisis and shortage of linguists in both the language community and other areas of business and national interest. 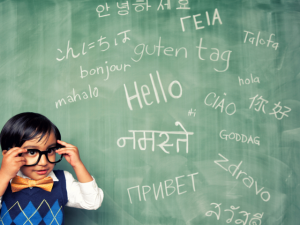 However, institutions, schools, and individuals around the country have been fighting against the tide to support language learning across all levels and disciplines; from Spanish to Korean to regional dialects of Arabic, languages are being taught in previously unserved areas, with a focus on real-world application and making students truly multilingual. Whether it be encouraging bilingual migrant students to become trilingual, teaching military personnel the regional dialects of Arabic or other key languages, or preserving indigenous languages for new generations, there are many exciting new opportunities for languages old and new, popular and almost forgotten, for students, adults, intelligence officersl, and anyone else interested in learning a language in the United States.

Over the next few months, the NML blog will run a series of feature articles entitled “The Future of Language Learning,” in which all aspects of the teaching and learning of languages will be highlighted. We will be exploring the learning of language through several lenses, talking to experts from all fields of learning, including schools, linguistic study, and more, giving a broad overview of what is happening in our community. From times of need there is the potential for a great revitalization, and the present indicators of the future of learning languages is starting to appear to be no exception.

If you have a unique perspective or insight on the learning of language in the 21st century, please contact rob@languagemuseum.org to potentially be featured as part of an interview or article.